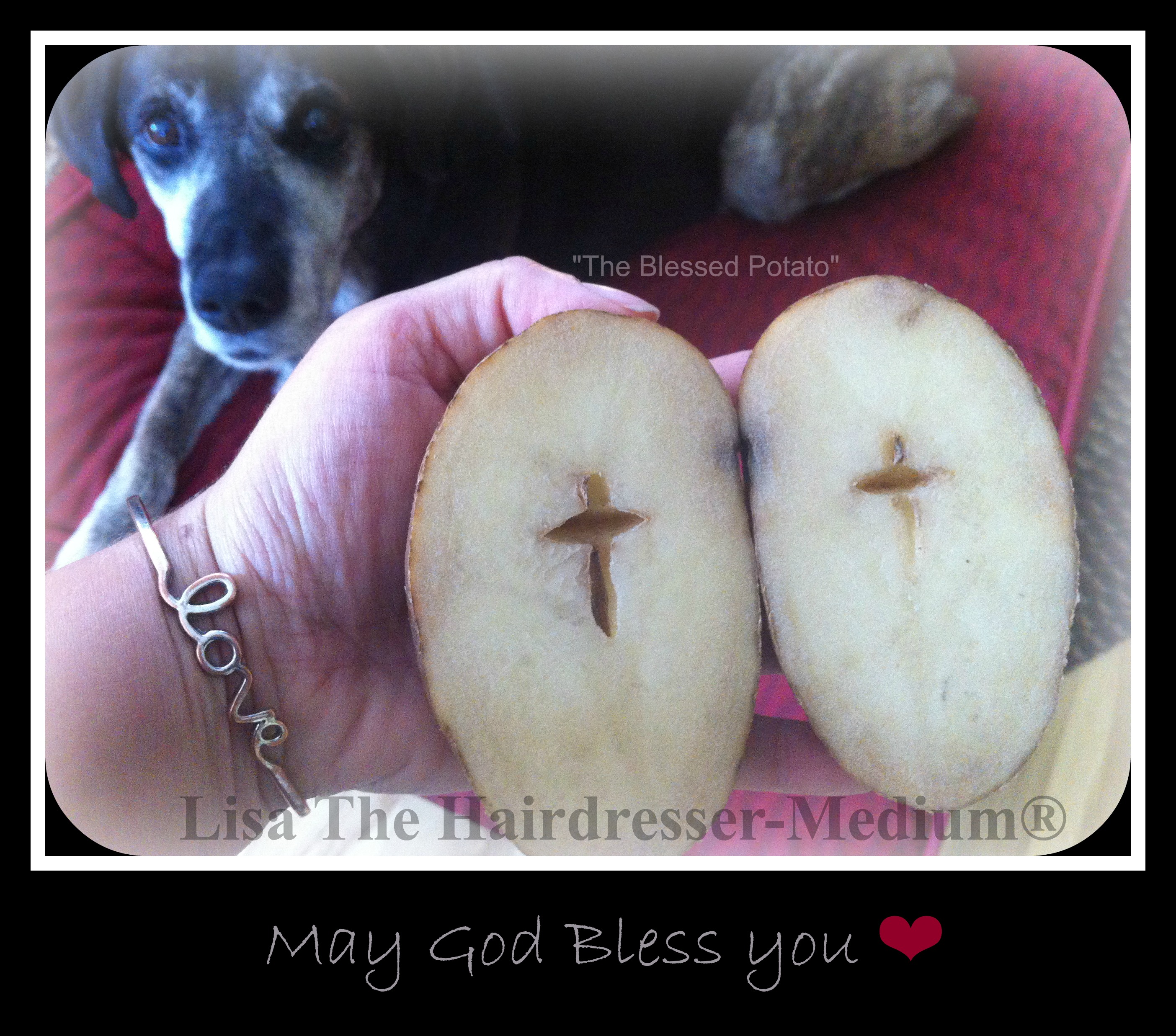 A good friend of mine had crossed over into the light with Jesus on June 6th, 2014. How do I know this for sure? Well, my friend called me the week prior to share two specific dreams he had where he walked with and spoke to Jesus. He was being guided by Jesus to follow Him. He was a bit apprehensive at first, and he asked me for validation of what he should do. I shared with him what I perceived from his dreams. That if he was curious he should walk through the door. I also said to him that He was standing alongside of Jesus and what better place to be. I specifically said to him if you do go through the door and are welcomed into the Light of The Heaven-world please be sure to come back and speak to me, share with all of us the beauty and L❤VE that you find there.

June 6th was the actual day that the Blessed Potato was discovered by my brother-in-law, Brendhan Fogarty while barbecuing with friends at his home. He gets the full credit for revealing the cross in the potato, as he was the one who cut in half this Blessed Potato. I was able to share The Blessed Potato with my friend Mike’s family on the day we celebrated him & his beautiful life of service to others. It was on this exact day that the potato was discovered. A prominent sign! On the day of his service none of us were fully aware of the validity of this sign that he had sent, via this particular potato. It was not until my brother-in-law personally gave me the potato that we realized it’s validity. Once I finally held the Blessed Potato in my own two hands I knew that this was a Divine Blessing from God.

I knew with out a doubt that my friend had actually gone through the door… with Jesus.
Btw.. I did ask him to send us a valid sign once he arrived…

He obviously obliged! I also wanted to share that when I held the Blessed Potato in my hands and I did a little tuning in meditation, I heard in my thoughts, clear as day…

Pretty cool is all I can say!

† The fact that the cross is on both sides of the potato, is a huge sign! Signifying a double Blessing! Which I was told from Spirit would occur, and It did! When I was out in Chimayo, New Mexico in the Spring of 2014 both of my feet were healed from an undiagnosed disability that had plagued me for over 5 months. Chimayo, a tiny town is known for it’s Sacred Holy Earth at The Santuaro De Chimayo – The little chapel at The sanctuary of Chimayo where miraculous healing takes place for many people. I could barely walk let alone stand without excruciating pain when we pilgrimaged there, yet I was healed a few days after placing the Holy dirt on my shoes and feet. I opened my heart to God and asked for healing for the Highest good of all. I was completely healed a few days later and have been fine ever since.

My dog was also miraculously healed from a cancerous tumor in his chest cavity as well. The night before we were to put him down as he was in such intense incredible pain I had a feeling to place the Holy Sacred Earth on his body and to pray for healing for his highest good. I then let go of the outcome. My friend who had just passed had already crossed over into Spirit so I knew he was assisting as well. He was so worried about my dog before he passed. The following morning when I woke up my dog’s tumor had significantly shrunk to the point of barely being there! I was completely blown away!

I took him to the vet since I still had the appointment to put him down the next day. My veterinarian took one look at him and said today is not the day! I cried tears of joy for he was truly Blessed and fully healed. (My dog Apache had his healing occur in June of 2014 and as of this blog story being posted he is still doing well & it’s now July of 2015. How long I have him I do not know but I will continue to marvel at the Blessings many have received via The Holy Sacred Earth and the Blessed Potato. I was also guided by Spirit to make this Blessed Potato go viral and I wasn’t quite sure how to do this, so I prayed about it.

I was guided by Spirit and by a few other people some of who I believe Spirit used as messengers to explain to me how to get the message out there to the masses. I was guided to use This photo of The Blessed Potato for healing. After being told that many photos hold energetic vibrational frequencies. Some vibrations being much higher than others. I pay it forward by giving out and sharing The Blessed Potato prayer-card with anyone who needs prayers and healing. As long as I have a little of the the Holy Sacred Earth left, I am happy to share it with those in need.

Please take from this story what you will, but I know in my heart that miracles happen to those who Believe ❤

❤ The full version of this story in it’s entirety will be featured in Lisa’s forthcoming book.